How important is nuclear power in India energy transition?

The global energy system is undergoing a rapid transition driven by emergence of new technologies, entrepreneurial spirit of next generation business leaders, reorientation of policymakers and shift in consumer mindset. Ever rising concerns for the ecosystem intensifies new-found love for sustainable energy. The Paris climate change agreement triggers strategic actions for voluntary reduction of existing greenhouse gas emissions in a time bound manner. Understandably, an unprecedented force being applied for faster adoption of sustainable energy. It is visible that drivers, endogenous and exogenous to energy system, are knocking the boundaries beyond conventional energy sources.

The global leaders especially in the developing and least developed countries are facing challenges to improve energy access to modern energy at affordable price in a sustainable and responsible manner without sacrificing economic growth and social development.

Emerging economies like China and India have suddenly thrown their weight behind ‘fight against’ global warming and climate change. Nuclear energy once a very popular alternative source for developed countries such as US, France, Russia, Republic of Korea, Germany, and Japan is being squeezed.

Anti-nuclear groups across the globe are pressing for closure of nuclear plants on the ground of environment standards or economic viability. Pressure groups have been successful to shut down nuclear power plants like San Onofre & Diablo Canyon in the US.

Analysts argue that nuclear power never received the quantum of generous subsidy the fossil fuel received in the past and renewable is receiving today. In absence of public funding, nuclear power will find it tough to compete against natural gas and renewables in the future.

Further, low gas prices at the Henry Hub, around $2.9, severely impact survival of nuclear power plants in the US. According to media reports, nuclear power plants having capacity of 263TWh1 of electricity have either closed down or planning to retire or are running the risk of forced closure due to market forces.

With total installed capacity of 6.78 GW, India contributed only 1.72 per cent of global nuclear installed capacity. Despite nuclear being a cleaner fuel, it remains outside the priority list of power sources in India. As per the Central Electricity Authority, during April-July 2018, India generated 13.47 billion unit (BU) of nuclear power compared to 51.72 BU in the corresponding period in 2017. During the same period, nuclear power contributed 3.19 per cent of India’s total power generation, which includes import from Bhutan.

In India, a number of lawmakers are curious about the progress of nuclear energy in India. Over the past couple of months, several questions raised in parliament on status and progress of nuclear power in India. At present, nine nuclear power reactors with generation capacity of 6.7 GW are at various stages of construction, which could take the total installed nuclear power capacity to 13.48 GW by 2024-25. So far, as of June 2018, Rs 36,842 crore were spent by these projects against the budgetary allocation of Rs 89,899 crore2. In addition, government already granted administrative and financial approval for setting up 12 nuclear power reactors with an aggregate capacity of 9 GW.

Out of which, 10 reactors each with 700-MW capacity will be indigenous Pressurised Heavy-Water Reactors (PHWRs). On successful completion of these projects, cumulative nuclear capacity would reach 22.48 GW by the year 2031.

As private investment is not allowed in the nuclear power plants, so the government owns sole responsibility of developing this sector. Despites its higher capital investment cost, nuclear power still makes economic sense in India. However, falling power tariff of alternatives like wind and solar power offer formidable competition, so stress is on nuclear power to survive. The average tariff of nuclear power in the year 2017-18 was Rs 3.55/kWh. Tariff rate was as low as Rs 2.06/kWh for oldest station TAPS-1&2 (Tarapur) compared to Rs 4.10/kWh for the latest station, KKNPP-1&2 (Kudankulam).

For a long period of time India was dependent on foreign technology partners such as Russian and France for nuclear power generation. Now, 10 indigenous PHWRs with a capacity of 700 MW are under implementation stages. If commercially successful, the nuclear power programme could achieve faster and cost-effective replication.

In India, nuclear power capacity addition is found to be surprisingly slow -- only 10,00 MW was added during 2015-18. Therefore, the government is striving for timely completion of the ongoing projects. The government must address issues related to the pre-project activities such as land acquisition at new sites, clearances from various ministries especially environment ministry, and finding timely foreign collaborators. In addition, continuous efforts must be made to bring down capital cost of nuclear power plants. Further, safety which is a major concern should be addressed on priority basis. In this connection, setting up a Nuclear Safety Regulatory Authority at the earliest would be helpful to the nuclear power programmes in the country.

To meet rising electricity demand owing to emerging e-mobility nuclear power is one of the better solutions. Considering lower capacity utilisation of renewables, rising fossil fuel prices and ever soaring pollution problems, potential of nuclear power must be fully exploited. 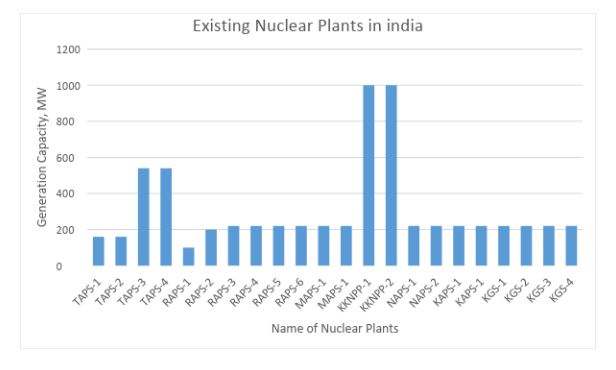